Fox Galleries is proud to present Odyssey by Tyra Hutchens. This new paintings are part of Hutchens’ ongoing body of work, analysed and illuminated by Simon Lawrie in the following essay:

Filling the void: dark romanticism and deconstruction in the recent paintings of Tyra Hutchens

Much of modern and contemporary art entails a mechanism of de-familiarisation; objects are displaced from their natural context, formally augmented or distorted, portrayed and experienced in a new light. Amid the burgeoning visual languages of modernism, literary theorist Viktor Shklovsky proposed that ‘the technique of art is to make objects “unfamiliar,” to make forms difficult to increase the difficulty and length of perception’.1 In other words, art can serve to counteract our habituation to the world and things. The operation of ostranenie, translated as ‘de-familiarisation’ or ‘estrangement’, is seen throughout recent art history, and contemporary art often relies on similar methods of repurposing, recontextualising or re-presenting everyday objects, subjects and situations.

Tyra Hutchens takes the unfamiliar not as an end but as a beginning, as cause rather than effect. In this new series of paintings and drawings, it is the recognisable itself that he renders problematic, inscrutable, and often uncanny. Objects and situations are grasped only cursorily, and seem to have san autonomous symbolic agency. These works waver between abstraction and figuration, destabilised by fundamental spatial ambiguities. Such visual equivocation immediately unsettles any bearing and gives the work an alluring complexity. 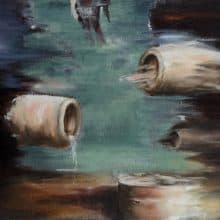