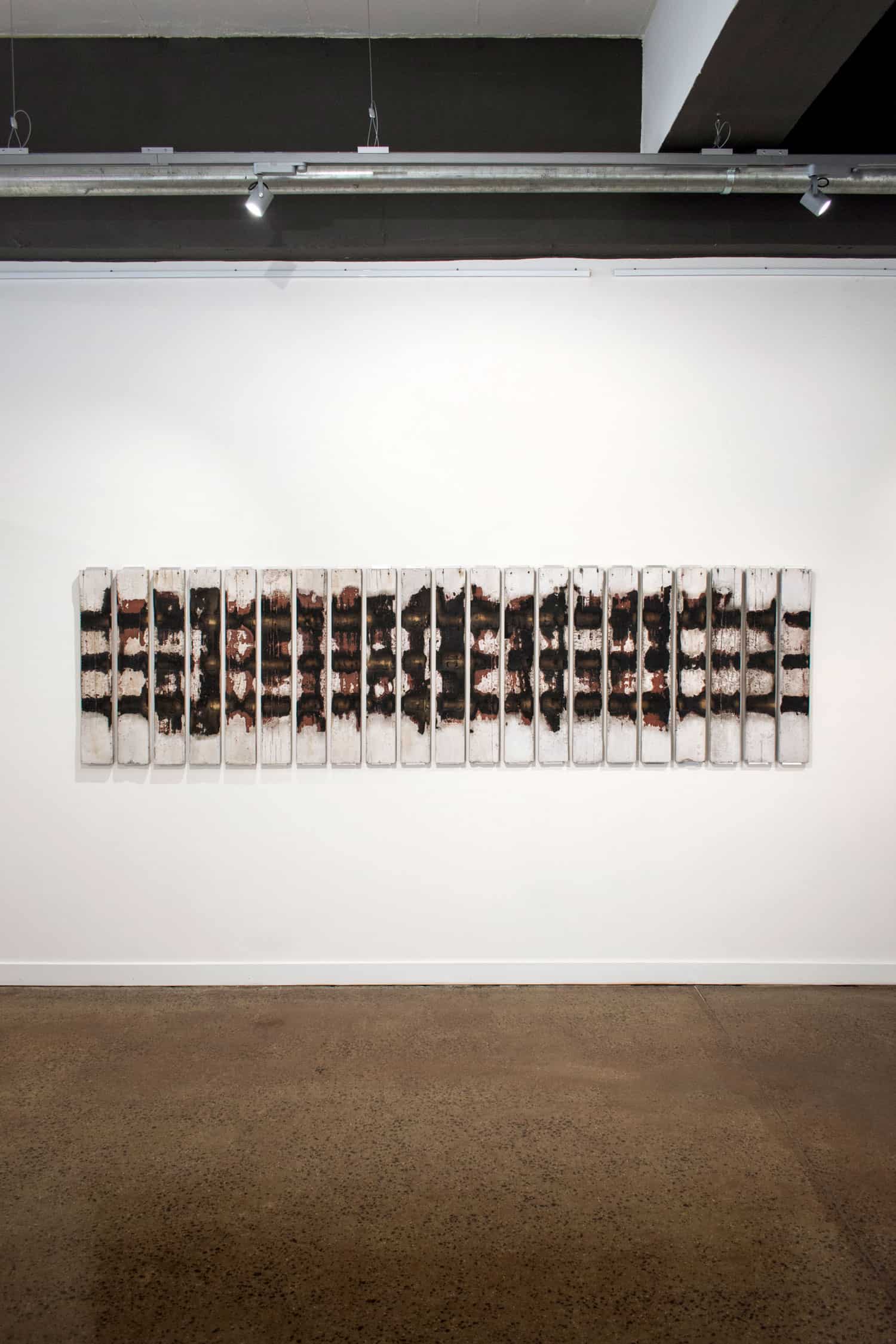 Congratulations to Robert Andrew for being selected as the winner of the 40th Alice Prize 2018 for his work White Wash Over The Burn. Judge Brian Ritchie, MONA FOMA Curator, called Andrew on the evening of Friday, 27 April to inform him.

About the prize
In 2018, the Alice Prize will celebrate its 40th incarnation with an increased award for the winning artwork, of $40,000. The Alice Prize is an acquisitive national contemporary art prize, welcoming entries from around Australia, in any medium or theme. Significant among regional art prizes, the Alice Prize contributes to one of the largest regional collections of Australian art, with works by leading artists from across its near 50 year history. Coordinated by the Alice Springs Art Foundation, the Alice Prize is judged by an expert selection panel and judge of national standing, with national exposure for exhibiting artists and the opportunity to show in Mparntwe/Alice Springs, the cultural heart of Australia.

About the work
“In ‘White Wash Over The Burn’ (2017) I took wooden panels from my colonial-era house in Brisbane, which would have been cut from trees predating colonisation. My great-grandmother was of the Yawuru people, from the Broome area in the Kimberley region in Western Australia. I used a CNC machine to embed the boards with text from her repeated applications for citizenship and subsequent denials. Once lit, the boards were quenched with ochre and oxides that seeped into the cracks and then covered with white chalk to bind. Often historical documents were intentionally burnt to destroy and cover up atrocious acts against Indigenous people, and I used this process of burning to enact mirror this form of violence back upon the English text as a cathartic strategy.”

About the artist
Robert Andrew’s practice-led research investigates denied and forgotten personal and family histories, utilising open-sourced, programmable technologies and machinery to erode, expose substrates, build stories and create residue. These works manifest as visually scraped back and built up palimpsests that reference technology, natural materials and the ‘artefact’.

Andrew is an artist of mixed heritage, a decedent of the Yawuru people from the Broome area in the Kimberley, Western Australia, as well as of European and Filipino descent. He holds a bachelor’s degree in Contemporary Australian Indigenous Art and an Honours Degree in Fine Arts from Griffith University, where he is currently a post graduate candidate for a Doctorate in Visual Arts.

His work is held in the collection of the National Gallery of Victoria and has been exhibited as part of Moving Backwards into the Future (2015) and Colony: Frontier Wars (2017) at the Ian Potter Centre at the NGV, as well as Ars Electronica (2017) in Austria. He was commissioned to make Moving from the Binary for the Experimenta Make Sense International Triennial of Media Art. In 2017 Andrew had solos at the Museum of Brisbane and Metro Arts Brisbane.