Fox Galleries now represents Victor Rubin, a prolific artist who has challenged Western traditions of representation for over four decades with metaphysical work on the self and the environment. Using visual language like a literary master Rubin explores the most universally complex questions of existence through allegorical visions referencing the apocalypse, mass migration, world wars, utopia and love with equal amounts of seriousness and ambiguity. Rubin’s ever-evolving approach is the result of a life dedicated to aesthetic inquiry, with reference to Picasso, Grosz, Boyd, Ernst, Van Gogh, Bacon and others. As Rubin put it, “The history of art is in my work.”

Born in Sydney in 1950, Rubin studied under John Olsen at the Bakery Art School before completing studies at the National Art School and Alexander Mackie in 1973. Since then he has worked as a teacher and lecturer at the Canberra School of Art and Victorian College of the Arts. Before relocating to Melbourne Rubin lived in London from 1988 to 1990, was an artist in residence at the Cite Internationale Des Arts, Paris and worked at the Beverley Springs Station in North West Kimberley, WA from 1992 to 1993.

Rubin won the Doug Moran National Portrait Prize in 1996 and has been a finalist in the Archibald Prize, the Sir John Sulman Prize, the Blake Prize and others. His work has been exhibited in numerous solo and group exhibitions including the 6th Biennial of Sydney in 1986, and is held in the collections of the Australian National Gallery, Canberra, National Gallery of Victoria, Art Gallery of New South Wales, Queensland Art Gallery and many more, including private collections in Australia, Asia, the US, UK and Europe.

John Olsen said, “At my Bakery Art School, Victor had an immense capacity for work… Thirty five years afterwards the compulsiveness has remained, the emphasis on creative attitudes mutated… He gives us works of significant diversity and originality. His work macro and micro continues to captivate, amuse and disturb. From cocoon to butterfly in his long journey he is surviving as an important artist of his generation.”

Rubin’s first solo at Fox Galleries will open in September 2018. 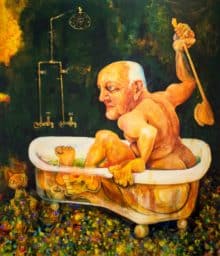