Fox Galleries is proud to present The Female Gaze by Esther Erlich, celebrated for over three decades for her distinctive portraits. The solo will feature paintings on canvas and works on paper, providing a rare opportunity for viewers to compare her approach to the two mediums. Dynamic variances in colour, saturation and line will reveal Erlich’s virtuosic methods for creating sensual and alluring figures.

Evocative of Jeanne Mammen, Egon Schiele and Gustav Klimt, the energy and gaze of Erlich’s subjects are palpable. Framed at an intimate distance, and locking eyes with their viewers, they seem to capture the visual experience of beholding the person you are falling in love with. Demanding attention, these mostly female figures seem to look as closely at us as we do them. Their provocatively beautiful faces and detailed hands are vivid apparitions above abstracted bodies that exist in no space or time.

Erlich invites us to wonder what we can know about another person simply by looking at them. This is the source of her continuous visual enquiry – the human pursuit of identity expression – explored through works she calls “vehicles for narrative”. The artist subtly provokes questions around subjective versus collective experience, the mystery of human emotions and gender politics. But for Erlich, making work is first and foremost about exploring and articulating the imagination. 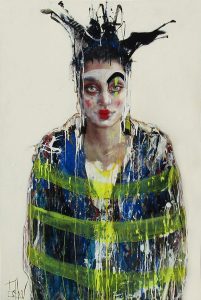