Fox Galleries is proud to present Firmament. This online exhibition can be viewed here or in our stockroom through 23 June – 14 July 2018.

Notes on the Firmament

The sky is forever blue

from Das Lied von der Erde, (The Song of the Earth) by Gustav Mahler

There is no distinction between the form and content of these images, they serve simply as a reminder to behold the wonder of the sky above. The beauty of the sky and the revelation of its content are identical.

Without the ever-changing veil of the atmosphere, the sky would be black. We would see straight out into the black infinity of space. In recognition of this fact, I have used a dark ground for these pictures, the black vanishes behind the veils of paint.

The sky is the largest natural phenomenon which can be seen by everyone on earth. The sky and the air we breathe unify us as human beings. I imagine that every day we all look up at least once, into the blue.

Blue, symbol of hope, represents infinity, wonder and universal beauty. Contemplating the firmament, “the boundless span of heaven’s vault”,(Haydn’s The Creation) stills the mind into silence and amazement and has been for centuries an inspiration to composers, poets, scientists, philosophers and artists.

In Haydn’s glorious oratorio, The Creation (composed 1796-1798), on the Fourth Day, the angel Uriel sings

Let there be lights in the firmament of heaven

to divide the day from the night,

and to give light upon the earth;

and let them be for signs and for seasons,

Romanticism, the counter-movement to the late 18th century Age of Enlightenment, sought to reunite man with nature. When the great polymath Alexander von Humboldt and scientist Aimé Bonpland climbed Mt Chimborazo in Ecuador in 1810, Humboldt attempted to capture the aesthetic qualities of the sky by using a Cyanometer, an instrument designed to help the observer measure the quality of the intensity of the blue of the sky.

Mahler’s symphonic song cycle, Das Lied von Der Erde, (The Song of the Earth) composed in 1908 reaches into the infinity of space and time:

The heavens are ever blue and the Earth
shall stand sure, and blossom in the spring.

……. Everywhere and forever blue is the horizon!
Forever … Forever …

Before all of the above, in The Divine Comedy, (long a touchstone for me), Dante wrote ecstatically of the Empyrean, the Heavens in his Paradiso and in the more earthly Purgatorio:

That was upgathered in the cloudless aspect

Of the pure air, as far as the first circle

Unto mine eyes did recommence delight

As a painter, I am drawn to Titian’s Venus Rising from the Sea (National Galleries, Edinburgh, Scotland). The background is almost all sky, of a blue likely made from ultramarine, an expensive pigment made from ground lapis lazuli, found mostly in Afghanistan, which in its natural state is speckled with “stars” of iron pyrite, making it resemble the firmament.

For me the focus of this project has been observing the sky in all its various states of light – blue, grey, cloudy and cloudless – and finding a way to make a small field of canvas and oil paint draw the mind into the contemplation of something beyond measure. 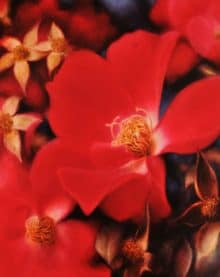 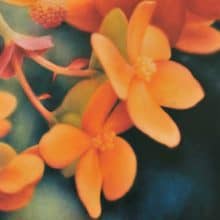